A Quick Trip to Nanaimo

In the middle of December, when visibility is typically pretty great, Charley Doney, Jonathan Saenz, and I headed up to Nanaimo. The plan was to meet Bill McKinnon and Bill Golley and do two days of diving on the Saskatchewan and Cape Breton with Shepherd Charters (Nanaimo Dive Outfitters). I had just thrown together a custom light arm mount system for my scooter and was anxious to try it out. We also had a super ambitious plan to get amazing shots in the Cape Breton engine room.

The first day brought great conditions, and we decided to start with the Saskatchewan to get everyone warmed up for the Cape Breton. I jumped off the boat and started getting the camera ready on the way down. When I reached the deck, everything was perfect: the crazy light arm system I scabbed onto my scooter was actually perfectly trimmed out in the water, and the visibility was fantastic. So with great excitement, I turned the camera on. And it immediately turned off. So I turned it on again, and this time noticed the wi-fi and low battery symbols before it turned off again. Gah! The wi-fi had somehow gotten turned since I built the camera the night before and drained the battery dead. So instead of getting awesome video, I got to lug around an unusable camera.

During the surface interval, we decided to move over to the Cape Breton and go for the engine room shot. I left my scooter behind, clipped off my Canon rig, and made a beeline for the engine room floor with Bill McKinnon to get set up before the other guys dropped in. As we descended, I noticed visibility was pretty milky inside, and from the floor, I couldn’t see the atrium windows above. And as the other guys dropped in, it started to get too tight to get decent shots. So we swam around in a big cluster for a while. I love it when a plan comes together! 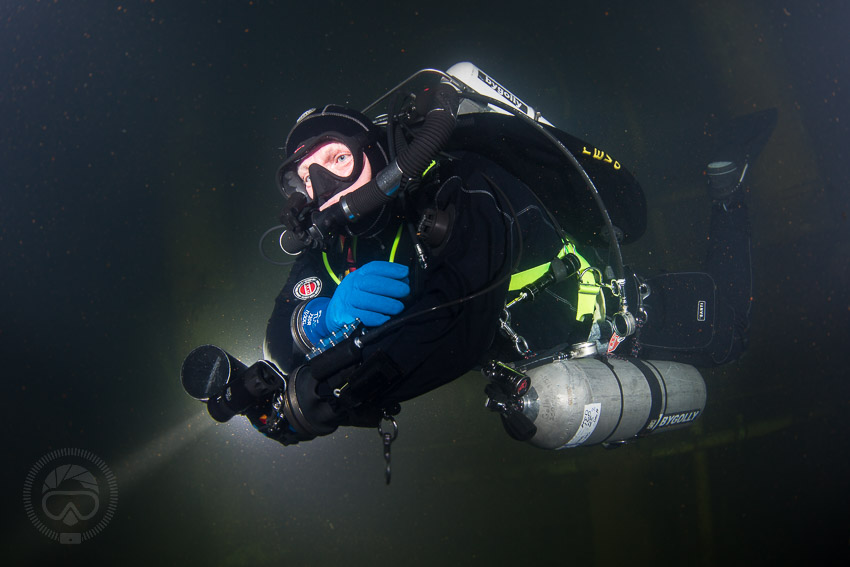 And here’s a random shot of the walkways.

Once topside again, I practically wore myself out swimming around trying different angles and camera settings. At this point, I was just trying to get photos I thought the guys might like of themselves, as well as get general practice since I hadn’t been shooting stills much in years.

It was pretty windy on day two, and Steve aborted the big wreck dives shortly after reaching the mooring buoys. I think at least half the divers were relieved we’d be diving the Snake Island wall, instead. I chose to leave my camera on the boat and just have a fun dive.

For the second dive, we hit the Rivtow Lion inside the harbor (aka “Nanaimo Plan B”). Visibility was much better than when I had dived this wreck a few times in the past, so Bill McKinnon and I chased Bill Golley around for about an hour or so trying to get good diver shots. Here’s one of him swimming under a davit. 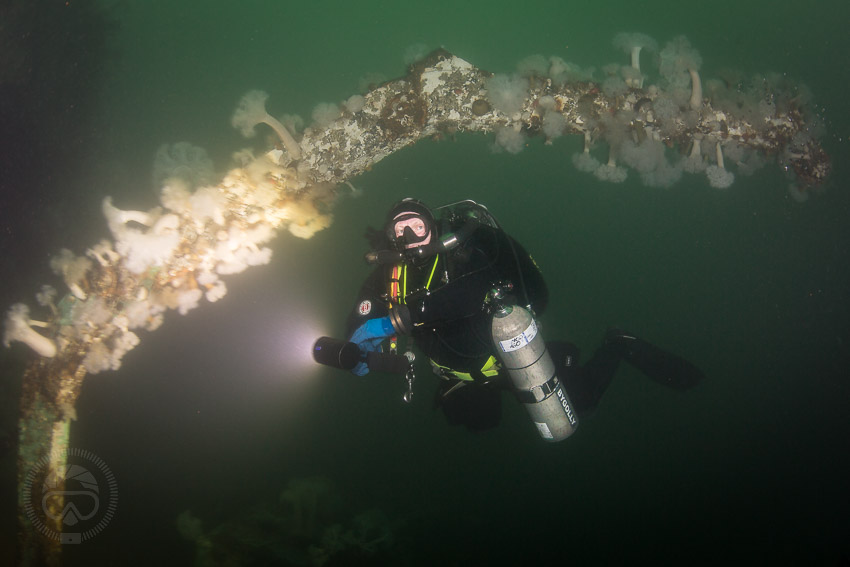 And here’s sort of a goofy one of him under the stern.

Even though not much went according to plan in the water, we still got to spend time with my two favorite Canadians, and I’m looking forward to the next trip up there.