At the west end of Lake Crescent, along the south side on Highway 101, there’s a turnout at Meldrim Point, also known as Ambulance Point. This point offers access to two great wrecks: the Warren car and the Steele Dodge.

Back in July 1929, the Warrens—a young couple—were headed home from Port Angeles when they somehow veered into the lake and disappeared without a trace. Sadly, their sons lived an entire life without ever knowing what happened to their parents. Only later was the car found by divers. You can read more about the story by Scott Boyd and John Rawlings.

Diving east of the point where the wrecks are located requires a special use permit from the National Park Service because there are human remains near the site of the Warren car. Email the rangers to get the form and instructions for filling it out. There is no cost for the permit.

The Warren car sits in about 160 ffw. The easiest way to locate the wreck is to surface swim or scooter along the shore until you see a white sign on the guard rail facing the water warning that a permit is required for diving. From there, descend the slope to about 130 ffw, staying about 20’ off the bottom, and then turn right and follow the contour. Staying off the bottom a ways will minimize your deco, and you should swim over the wreck within five minutes or so.

The car is remarkably preserved in the cold lake water, but is clearly very fragile. It should go without saying that you shouldn’t touch the wreck, and it’s illegal to photograph or video human remains. Slowly swimming back to the entry point is a great way to finish off your deco obligation.

Roughly 600’ past the Warren car and a little deeper around 190 ffw is a 1950 Dodge sedan owned by Dale Steele. On January 24th 1960, in icy road conditions, it slid off the highway into the lake. Fortunately, everyone escaped before the car sank, although the contents of the trunk weren’t retrieved until many years later in an event that received minor news coverage. Read more about that over at DCS Films. 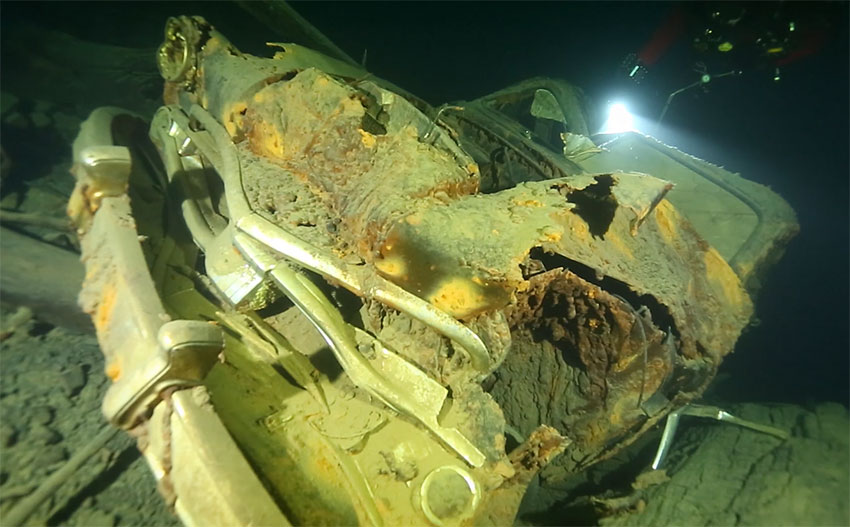 To find this wreck, stay on the surface until you reach the smaller turnout just east of Meldrim Point. Following the same procedure used to find the Warren car, descend at the point to about 165 ffw, stay about 20’ off the bottom, and turn right following the contour. You should swim over the car within a few minutes and find it wedged into a small gully between some tree trunks and a large concrete block.